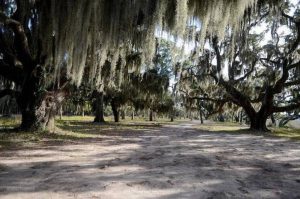 Whitehall is again front-and-center, as the Metropolitan Planning Commission (MPC) Monday night reviews yet another application from developer Sam Levin to develop the property.

It’s turning into another Sam Levin Magical Mystery Tour in which promises are made without ever really telling us what’s happening.

You Can Participate Monday Evening
This MPC meeting will be conducted electronically via Zoom and Facebook,
and the public is invited to “attend” and participate.

Keep in mind, after five different plans/proposals/applictions involving Levin’s Whitehall tract, not a shovelful of dirt has turned over. Many believe that Levin has no intention of doing anything with the property beyond plat approvals, after which he plans to leave us with a buyer.

Sam Levin’s vision is quit different from the Whitehall envisioned in the City of Beaufort’s Civic Master Plan, a supplement to its Comprehensive Plan updated every ten years as required by state statutes. In the Civic Master Plan:

“The conceptual plan for Whitehall envisions a traditional neighborhood, with the northwestern tip of the property preserved as public open space for the regional parks and greenway system. The plan illustrates one major entrance to the property, marked by a civic or religious structure, and a public green defined by townhouses and mixed-use buildings. The town center green would include a diversity of uses, while land closer to the river would be primarily residential, including apartment buildings, townhouses, and single-family houses. A public dock would provide another connection to downtown Beaufort or other destinations from the river. Developed using this approach, the Whitehall property would become a logical extension of downtown that compliments, but does not compete with, the historic core.”

Of the five proposals for Whitehall Levin has made, only one came close to the vision outlined in the Civic Master Plan. But that proposal has been abandoned by the developer.

Here’s a tour of Levin’s multiple plans for Whitehall: 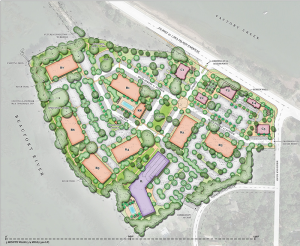 MAGICAL MYSTERY TOUR: STOP ONE
The tour began in late 2017, when developer Sam Levin and partners from Atlanta proposed seven apartment towers, a 100-unit independent living facility and nearly 20,000 s.f. of retail/commercial space at Whitehall. The MPC unanimously rejected the proposal, seeing that it contributed nothing to the character of Beaufort while occupying one of the most visible remaining land parcels close to the City.

Click here to read more about this stop on the tour.

MAGICAL MYSTERY TOUR: STOP TWO
Not to be deterred, Levin then proposed a significantly smaller plan for “between 80- 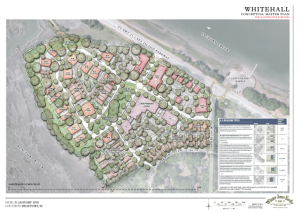 100” single-family homes, small-scale apartment units, row houses and “cottages” abutting Harborview circle. 20,000 s.f. of retail development abutting the Sea Island Parkway remained. And a four-story, 100-unit Independent Living facility has been relocated to the center of the property. This was a feasible proposal, and it gained support of the Sea Island Coalition and the SC Coastal Conservation League, and ultimately was approved by the MPC.

Click here to read more about this stop on the tour.

MAGIC MYSTERY TOUR: STOP THREE
Before the ink was dry, Levin agreed to sell half of the property (9.72 acres) to the Beaufort County Rural & Critical Lands program (despite the fact that he had rejected that move two months earlier). The sale price was $5.45 million in taxpayer and private funds, the highest per-acre price ever paid for land in Beaufort County. Levin’s Whitehall Partners retained ownership of the remaining 10.2 acres of the Whitehall parcel, and indicated his plan was to develop and operate a 100-bed independent living facility on the site.

Click here to read more on tis stop of the tour from the Island Packet.

MAGIC MYSTERY TOUR: STOP FOUR
Fast forward to May 18, 2020. Before the MPC was yet another proposal for Whitehall, this time a development of some 11 buildings abutting the park to the east. Not much was ever revealed about this plan – Apartments? Retail? All anyone could do was guess, and the only clues were a building marked “clubhouse” and an adjoining area marked “pool.’ Before the MPC could begin consideration, Leven withdrew the plan for reasons no one really understands. The Sea island Coalition commented on this plan prior to the MPC meeting; click here to read more on this stop on the tour. 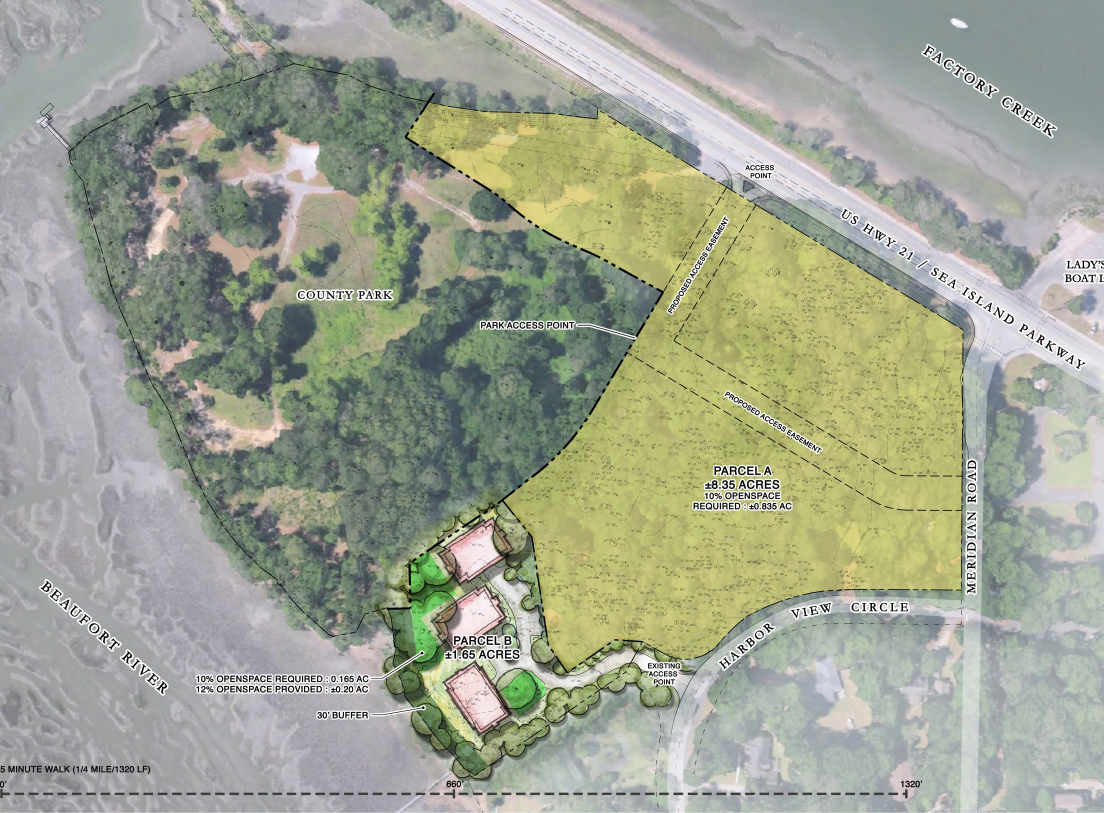 MAGICAL MYSTERY TOUR:  AND NOW…
Fast forward to Monday, June 15. Now before the MPC is a yet another proposal from Sam Levin, this time for a subdivision of the property into two separate lots, one 8.4 acres and the other 1.6 acres. No further development of the large parcel is now anticipated in this filing, but the developed did submit a “sketch plan” for the smaller parcel showing three buildings accessed via a driveway, and accessed through an existing (but undeveloped) access point off of Harbor View Circle. Apartments? Townhouses?Live-above office space? Cottages? The Beaufort Code under T4-N zoning permits a wide range of building types including (but not limited to!) apartment buildings, mixed-use buildings, rowhomes, duplexes, corner stores, and both attached and detached single-family housing.

Click here for more details of the latest plan, and the MPC agenda for Monday evening.