Whitehall lead developer Sam Levin, invited to meet with the policy committee of the Sea Island Coalition, reviewed his latest proposal for the Whitehall property on Lady’s Island with the Coalition on Friday.

The new plan was filed with the City of Beaufort’s Planning Department Feb 1. Click here to see the entire filing. The first Metropolitan Planning Commission (MPC) review of the new plan is scheduled for Feb. 19. 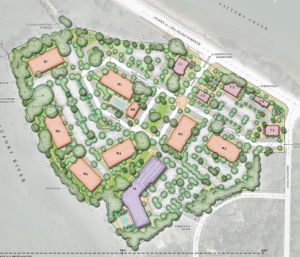 An earlier proposal was rejected in a 6-0 vote by the MPC in November before a standing-room-only crowd at Beaufort City Hall. The rejected proposal attempted to put new zoning in place at Whitehall that, among other things, would have permitted significantly larger buildings along with accessory uses such as drive-through facilities for restaurants and banks.

Levin told the Coalition the new plan was significantly smaller than the earlier proposal. Rather than featuring 240 residential units, the new plan called for “between 80-100” residences, comprised of single-family homes, small-scale apartment units, row houses and “cottages” abutting Harborview circle.

Retail development abutting the Sea Island Parkway is largely unchanged from the first plan, with space proposed for several restaurants and retail/office space for small businesses.

A four-story, 100-unit Independent Living facility remains part of the plan but has been relocated to the center of the property. 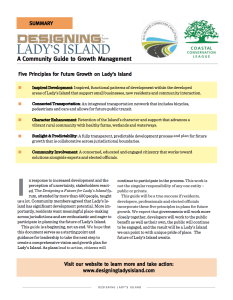 Chuck Newton, chairman of the Coalition, said the group was “encouraged” by the new plan, but pointed out that many details must still be clarified.

“Sam Levin has clearly heard the community on Whitehall, and to his credit, he has responded,” Newton said. “This plan increasingly reflects the Coalition and Coastal Conservation League’s “Five Principles For Growth Management” on Lady’s Island, which is a plus. But there are a number of details we would like to know more about. Still, this is a vastly improved plan compared to the first.”

The Coalition plans to explore various aspects of the Whitehall proposal in subsequent posts on its website and in e-mails leading up to the MPC meeting Feb. 19.

Readers are encouraged to comment about the new Whitehall plan at whitehall@seaislandcoalition.com  All comments will be passed to the MPC for its consideration.